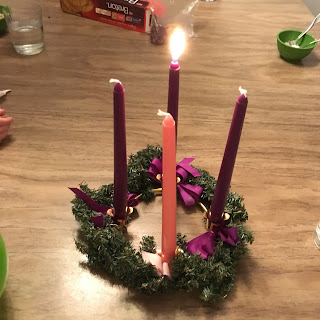 It’s that time of the year again, where friends, family, and stores are full-swing in the Christmas spirit. There is much to celebrate about an increasingly secular culture where people nonetheless throw themselves into a holiday that is centered around the birth of Jesus Christ. This time of the year provides more material reminders of the holiday than any other, from songs to trees to lights to to cookies to nativity sets. Even those who do not honor the “reason for the season” seem to be a little kinder, a little more generous, and a little more cheerful in the weeks leading up to Christmas.

Given this, it can seem particularly ironic when faithful Catholics try to direct focus back to the penitential and preparatory season of Advent. Instead of focusing on the thorn – the loss of Advent in our culture – why not simply acknowledge the rose, which is the increasing attention given to Christmas?

Looking at this as a simple either/or dilemma, however, does not really provide a solution in terms of the practicality of how Catholics choose to live in those weeks leading up to Christmas. We lose out on something if we disdain those who put their trees up on Thanksgiving and refuse to attend Christmas parties that happen during Advent. In particular, we may give the impression that we are “anti-Christmas.” But we also lose out on something if we ignore the liturgical messages given to us during Mass throughout the season of Advent and instead act as though the Christmas season precedes Christmas day. Specifically, in losing the preparation, we may also lose the celebration.

There are ways, however, to join in the joy and cheerfulness that we see around us while also practicing the preparation and reflection characteristic to the season of Advent. Advent has long been considered “the little Lent.” Like Lent, Advent is characterized by the color purple. It is a color that denotes preparation, but, more importantly, the color denotes penitence. Historically, the Catholic Church at times practiced daily fasting and abstinence from meat throughout the season of Advent. In some parts of the world, Wednesdays and Fridays continue to be days of abstinence from meat during the season of Advent. A century ago, American Catholics were encouraged, although not required, to take up Advent resolutions, much like today’s Lenten resolutions.

It may seem like an “Advent resolution” could throw a serious wrench in an attempt at joining in secular culture’s Christmas cheer. But that doesn’t have to be the case…in fact, penance has long been associated with supernatural joy. And with the effervescence of Christmas spirit surrounding us, it is possible to gain much by practicing a bit of penance in the midst of this season.

Just as Lenten resolutions center around the traditional triad of almsgiving, fasting, and prayer, so also for Advent resolutions.

The practice of almsgiving asks us to sacrifice our own desires and needs in order to give to others. In the season of Advent, we are surrounded with invitations to partake in this kind of giving. We can support national organizations, such as Catholic Relief Services, which does amazing charitable work around the globe. Local Catholic Charities also provide tremendous resources to the community. The parish food pantry or other parochial ministries are great opportunities for almsgiving as well. Many parishes have giving trees, sandwich-making drives, and the like that can become part of our Advent.

Beyond these established organizations and ministries, we might also use the season of Advent to pay more attention to others around us, rather than getting lost in our own plans. We are often unaware of the many needs of friends, family, and acquaintances who are right in our midst. Advent is a good time to write a letter to an elderly family member, take a meal to the mom of a new baby, or visit someone who is sick and homebound. For those of us with kids at home, this almsgiving of time may seem impractical or even impossible. But there are other opportunities as well. For example, Advent may be the time to save a parent a trip by offering to take his child to and from sports practice. With a little creativity and increased intention to the needs of those around us, we can find ample opportunity for almsgiving.

Fasting, as mentioned above, used to characterize the season of Advent, as it did Lent. Our Eastern brothers and sisters in the faith continue to practice a Philippian fast (beginning on November 15th after the feast of St. Philip) prior to the great feast of Christmas. Most of us Catholics are quite out of the habit of fasting, but, nonetheless, there are some smaller “fasts” we can make in the weeks prior to Christmas.

Some suggestions include giving up sweets, alcohol, meat, or snacks between meals. While reminding us that we are still preparing for Christmas, abstaining from such foods during Advent can help accentuate the joy and celebration on Christmas day and throughout the Christmas season. For those that dread the long season of Lent, note that the season of Advent is much shorter than Lent! Of course, we may find ourselves in situations, such as Christmas parties, where we are expected to partake of celebratory food and drink. One way of addressing this is to select the cookie we least desire or limit ourselves to only one drink.

Like Lent, Advent is a great time to renew our prayer life. In particular, during Advent we might spend time reflecting on the coming of Christ: in his birth in Bethlehem, at the end of time, and in the Eucharist. The daily Mass readings for the season of Advent are rich in meaning. The “O antiphons,” featured in the traditional song “O come, O come, Emmanuel,” also inspire a sense of desire and anticipation for Christmas. The nightly lighting of an Advent wreath, marking the weeks with the three purple and one pink candle remind us that we are still waiting for Christmas. Those who pray the Rosary regularly may benefit by focusing upon the joyous mysteries during Advent.

There are times where we may feel overwhelmed by shopping and wrapping, cleaning and cooking. But these acts, too, can be occasions for prayer if we choose to make them so.

Finally, one of the best ways to prepare our hearts for the celebration of Christmas is to partake in the sacrament of Confession. The penitential acts of identifying and confessing our sins may be the most important preparation for Christmas, and the grace received during absolution will surely be one of the best Christmas gifts we get. During the weeks leading up to Christmas, there is much that we have to do, but in the end, we have to remember that we aren’t ultimately responsible for Christmas happening. It is a gift that we can receive, better or worse, depending upon our preparation.

So, as Advent begins and continues alongside the already happening Christmas celebrations, let us do our best to live Advent well. Such a commemoration of this season will not only prepare us for Christmas day, but also contribute to the joy we see around us.

Posted by Theologian Mom at 6:01 PM