Detachment from Material Possessions or When Kids Destroy Your Stuff 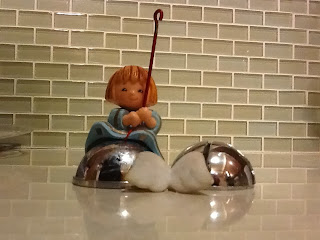 One of the wonderful reminders given to us by Pope Francis is the need for Christians to be detached from their material possessions. It's hard to avoid hearing that message in the gospels, anyway, but in our generally affluent country, the message is not usually a popular one. "Struggle" is one way to describe it for those of us who live in a situation of comfort; being detached from material possessions takes constant vigilance and effort. And yet, the struggle is worth the constant vigilance it requires because of the primacy that spiritual goods should take in our lives.

And here is one of the great benefits of parenting mortification: kids constantly damage, ruin, and destroy stuff. Before I had children, I had much less opportunity to mortify myself in terms of material possessions. My first major purchase - like many young adults - was a car: a brand-new, shiny silver Toyota Corolla. I was determined to take good care of my car, hoping that I could pay it off while I was working for a couple of years and have it in great condition when I began graduate school. Take care of it I did. I washed and vacuumed it weekly. Yes, you read that correctly, WEEKLY. No fooling around here. Once when I was giving a ride to a colleague of mine who had several young children he asked, "What, did you buy this car yesterday?" And I remember I was so proud to have evoked such a question, even as he observed that his van was never so clean.

Now, fast forward a decade and add 140,000 miles to the car. Little did I know that the Corolla would become a family car, and then the car my husband would use to commute to work. The paint has been scratched in a few places; there's even some rust showing on the body. The floor mats have dirt ground into them. Two hubcaps are missing. There are car seats in the back, along with the requisite crumbs, as well as some upholstery stains from milkshake spills. I'd like to take better care of it, but the fact is, it's just  not a priority, and it will never be in the condition it was before I had kids. And I think I'm better for it.

There's always a bit of tension between being a good steward who takes care of possessions so as to make them last longer and then the inverse where the possessions become idols and taking care of them is an act of idolatry rather than stewardship.

Living with young children highlights this tension in life. We want to communicate to them the need to take care of possessions as a way of living stewardship and simplicity; we don't want them to think of possessions as disposable and easily replaceable. At the same time, however, we want to communicate that in the grand scheme of things, possessions just aren't that important, and we ought to be detached from them, such that we can live without them and still be happy and holy. Numerous involuntary opportunities to work on detachment from possessions occurs when parenting young children.

Christmas has been a good time for me to reflect on this, as I've watched my childhood ornaments be destroyed daily by my children. Most recently, it was this darling angel, dutifully labeled by my mom with my initial and the date '84. The halo has gone missing, the wings are broken off, the bell came apart and finally the angel came off the bell altogether. So in other words, the ornament was carefully preserved for nearly thirty years only to be ruined by my children in a remarkably short amount of time. 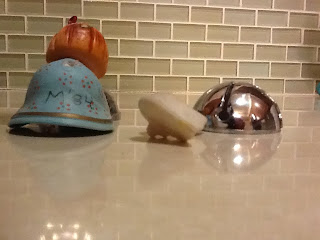 This, of course, is a relatively minor example. Although I do find it a bit sad, and I am a tad sentimental about it, I can't say I was really all that attached to the ornament. The tougher mortification for me is living the daily battle against crayon marks on the wall, carvings in the wooden furniture, scribbling on books, mud on the carpet, missing toy pieces, scratched up CDs, and, well, you get the picture. Again, we want to teach our kids to take care of things, but we don't want them to think we take care of things because that's an end in itself.

Here are a few practical ideas for turning kids destroying your stuff into a spiritual asset - a mortification - or death to self so as to live more fully in Christ. First, fight the anger. It totally makes sense to be upset when you see your child break something, whether purposely or accidentally. Take a deep breath. Say to yourself silently, "I wasn't going to take that with me when I died, anyway." If you need to repeat it a few times, do.

Secondly, communicate to your child: "I'm very angry with you for drawing on my book because I'm trying to take good care of that book so I can enjoy reading it. It's hard to read with pen marks all over it."

Third, put the message into action by proposing that your child find some way to "pay" for the damage they've done. "How would you like to pay me for that?" You might suggest that they lend you a toy for a few days, or, if they happen to have money, you can ask for payment. If they've done something like drawing with crayon on the wall, they may be able to perform the clean-up themselves.

Fourth, try to live with your damaged possession rather than immediately replacing it. When my son pulled on my gold chain necklace (that my husband had just had repaired as a birthday gift for me) and broke it, I decided not to get it repaired again, nor to replace it. If it's something that you can live without for awhile, or live with in a damaged condition, accept this as a mortification that fosters your detachment from material possessions. Every time that you go to use that possession, you can repeat your initial reaction: "I wasn't going to take that with me when I died, anyway."

Fifth, teach your kids to do the same. My daughter approached me with a scratched DVD that wouldn't play and asked me if I could buy a new one because they wanted to watch that particular movie. "How did it get scratched? Did someone leave it on the basement floor out of its case?" Of course, the answer was yes. So I apologized and said that I'm not going to replace things just because the kids haven't taken care of them.

Sixth, fight against the desire to live in a perfect, beautiful environment. Now is not the time for that; heaven is the time for that. Of course, try to buy things that can withstand children's use; invest in cleaning products that will allow you to restore damage. But make your house a home, a place of hospitality; don't think of it as a museum. You may want it to be clean and nice, well organized and aesthetically pleasing. I find that most of the time it's impossible to meet my standard for what I'd like the house to look like, and this too is a good mortification, a good reminder that life's not all about me and what I want. Accepting constant imperfections - the smudge on the couch, the toy on the floor, the broken drawer on the bathroom vanity - especially those caused by the little ones who live with us can truly aid us in being detached from material possessions. Let this challenge of parenting bring you closer to God.

Lastly, when it comes to taking care of possessions, living with damaged possessions, and giving away possessions, be a model for your child of detachment. When your daughter breaks the chandelier (why she was sitting on the table anyway, who knows...), don't be afraid to let her know that even though you are upset, she is way more important to you than a chandelier. And you can live with the broken chandelier because you love her and know that she lasts forever and the chandelier won't. So also, don't stand in the way of your kids' detachment from material possessions.... When your child decides to give away that stuffed puppy doggy she got for her first birthday from her aunt that she's taken everywhere over the last five years... let her. She wouldn't have taken it to heaven anyway.
Posted by Theologian Mom at 7:18 PM

Email ThisBlogThis!Share to TwitterShare to FacebookShare to Pinterest
Labels: mortifications