On the Mortification of Pregnancy 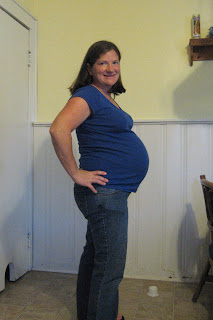 (Here I am, making it look easy.)
The end of my first pregnancy happened to coincide with Lent, as my oldest's due date was Easter Monday. I remember when my husband asked me, with Lent approaching, if I had thought of what I might do as my Lenten penance. "Gosh," I said, "I thought maybe I'd weigh 40 pounds extra, have a constantly sore tailbone, non-stop acid reflux, sweat profusely in public, wear all unflattering clothes, have swollen hands and feet, get winded even on short walks, and generally just be uncomfortable." Novice husband that he was, he smiled and said, "No, really, are you giving something up?"

And while I can rattle off a list of the discomforts of pregnancy pretty easily, I also admit that I have had pretty "easy" pregnancies compared to many women I know. Nonetheless, when a fellow parishioner approached me after Mass one day and asked how I was feeling (people love to ask pregnant women how they are feeling) during my fourth pregnancy, and I said, fine, she proceeded to observe that I must have easy pregnancies if I've been willing to have four of them. To be honest, I think the underlying thought behind this comment was related to some acquaintance or perhaps family member who commented that she is done having kids because the pregnancies were so tough. Or maybe I was just feeling defensive, because I responded that by eight months pregnant, there's nothing really easy about being pregnant, whether dealing with the oppressive summer heat (and no central AC mind you) or chasing an active toddler or whatever. I guess I just wanted it to be clear that I'm not having another child simply because it's "easy" for me to be pregnant nine months, give birth and then raise another child. Pregnancy, birth, motherhood--these things take sacrifices, let's be honest.

It's not that I'm seeking recognition for my personal sacrifices regarding pregnancy or parenting. But I don't think we're doing anyone any good by thinking that for some women this stuff is just easy and that's the main explanation for their willingness to bear children. Of course, there are some women who just love being pregnant and seem to have no complaints. I think by the end of the pregnancy, however, most women are ready to be done being pregnant and have the baby in their arms. And many women find pregnancy to be extremely challenging - not just the physical discomfort, but the emotional roller coaster, the psychological aspect of "feeling fat" and so on. It's no wonder that so many women seek inductions towards the end of their pregnancies. Pregnancy IS hard! And it's also not surprising that one way to frame the sacrifice of pregnancy is to say that it's all worth it in the end, when you get the baby handed to you and it's all over... or rather, it's all just beginning. This is true for most of us, but I still think there's more that can be said.

Pregnancy provides all sorts of unchosen discomforts and inconveniences (some quite unpredictable, with variation from pregnancy to pregnancy), and there are various ways that people deal with these - complaining, for example. And believe me, it is hard not to complain when you wake up with basically non-functioning elephantine hands every morning. But another way to deal with these unchosen discomforts is to make some kind of effort to accept them as mortifications - little ways of dying to self, embracing the cross, living for others. I've found that having specific prayer intentions for various discomforts can be helpful in making them meaningful. They become not just cause for complaint, but an opportunity for prayer.

And I have to add that one of the great things about offering up the mortifications of pregnancy is that they are temporary. Unlike chronic ailments, the discomforts of pregnancy generally come to an end (OK, some exceptions) after the child is born. Knowing that there is an end in sight can help to get through to the end with more than just resignation to the discomforts. Even if it's hard to remain "cheerful" with the ills of life, one can find ways for pregnancy challenges to become meaningful and prayerful along the way, and not simply dependent upon knowing the earthly reward of a cute little baby that lies in store...but rather remembering the supernatural benefits as well. 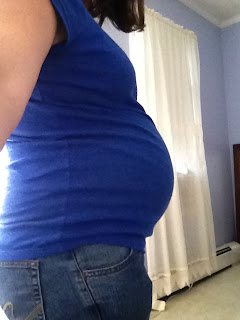 No one said it would be easy. But it can be worth it, in more than just one way.
Posted by Theologian Mom at 6:32 PM