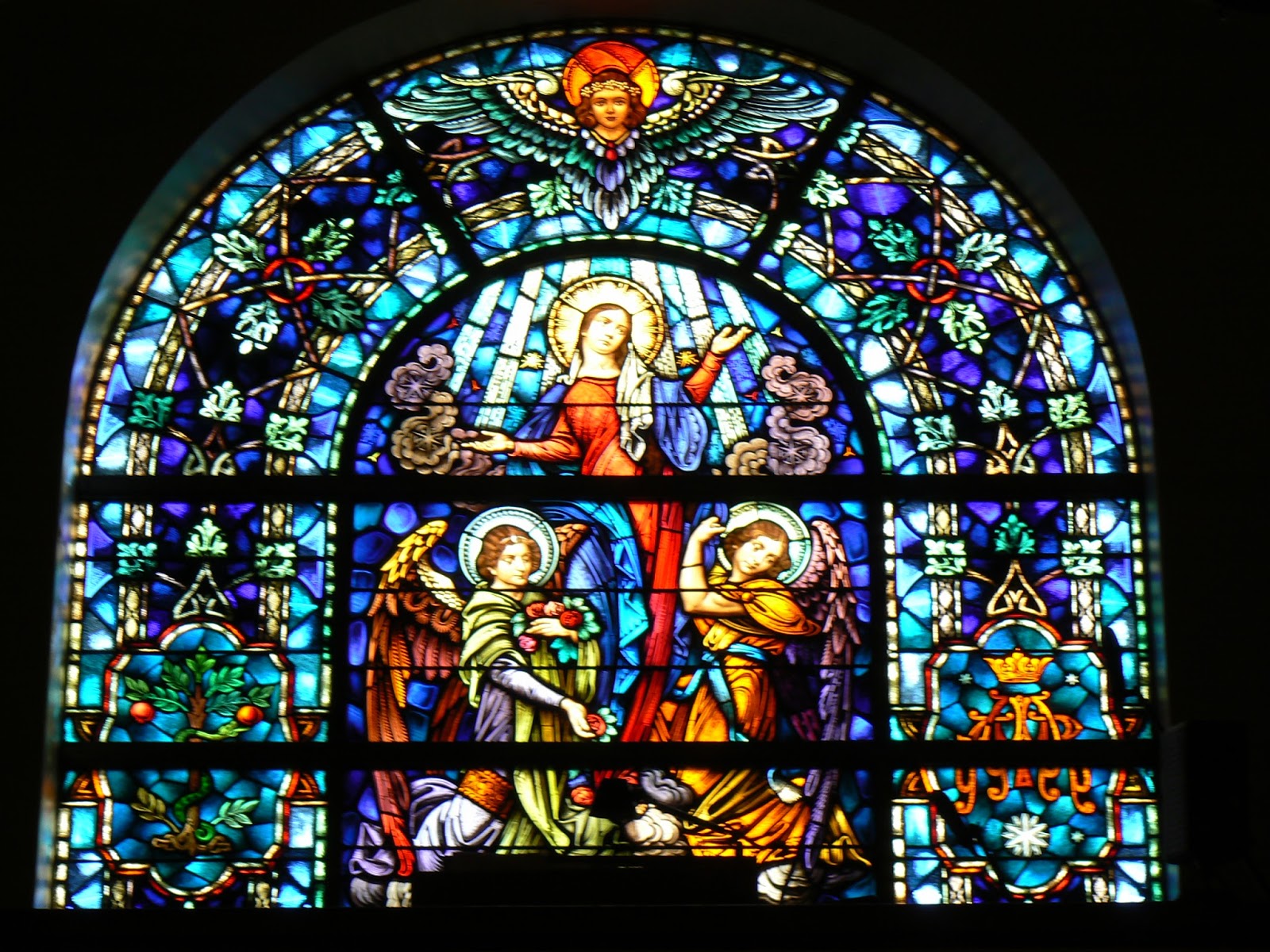 Perhaps you remember what it was like to attend Mass before you had young children in the pew with you. Actually, I'm having a hard time recalling the experience. But I can sort of imagine what it would be like - sitting quietly, perhaps following along with the readings and prayers in a missal, and participating fully in the liturgical words and gestures of the Mass.

Once a child enters the scene, however, Sunday Mass can become a real challenge. Initially there are unpredictable newborn cries and dirty diapers to address. Soon follows mobile children who refuse to sit still and prefer to crawl under kneelers and escape to different pews. One of my toddlers loved to pick gum off the bottom of seats. Then babies start walking and are even less willing to sit still. And of course, it's at about that point that they also begin to talk (or yell) clearly. "ALL DONE MASS!!!" cried one of my toddlers...during the Eucharistic prayer. Once there are two or more kids in the pew, the sibling squabbles erupt - who gets to sit next to Mom, who gets held by Dad, who gets to put in the tithing envelope, etc. When kids get older, and parental expectations for Mass participation increase, that can also become a point of tension.

Of course, there are also times when our kids seem to be paying attention to what's going on, even interacting. Like when my daughter lifted up her dress to show Jesus her belly button. Or when she spotted our pastor walking into the sacristy in his cassock and yelled, "Fr. Jim is still wearing his nightgown!"

For some reason, of all the challenges of parenting, this experience of attending Sunday Mass with young children can be particularly demoralizing for those of us who are good Catholic parents trying to raise good Catholic children. I think there are several explanations for this. First, it is hard to go from recollected prayer at Mass to non-stop squirmy-kid-wrestling. It's difficult to give up the peace and contemplation that accords so well with participating in the Mass.

Second, the Mass situation is so public. Of course kids can embarrass parents in lots of public situations. But for those of us who prefer not to be humiliated by active, loud children, we tend to avoid taking them to opera houses, movies, and fancy restaurants. The ability to behave in a certain way is expected at such places, and, as a matter of fact, that still, quiet behavior is also expected in church... which is why it bothers us so much when our kids don't conform to that norm.

Third, given that expectation for calm, quiet behavior in a church, it is easy to feel judged by the people around us. We know that they are trying to pray. We know that screaming, jumping kids can be a distraction for people trying to pray...we know this from experience because it often distracts us from our prayer. Perhaps it's just parental paranoia, but I'm quite confident it's not - on the basis of angry glares I've received through my years of taking kids to Mass.

Our kids' childlike behavior at Mass can be difficult and embarrassing. We might even say we're mortified by their behavior. So, how can we change this mortification (embarrassment) into a mortification (death to self to live for God)? Here are a few ideas.

Let's remember why we're doing it. This is a part of our vocation to marriage. We are raising children in the faith. One of the key obligations of the faith is attending Mass. Therefore, we take our kids to Mass because we are supposed to do it. Like many aspects of parenting, it's challenging.

This situation bears similarity to others I've discussed on this blog. Being deprived of regular sleep, having our stuff destroyed, getting insulted by our children - these are all difficulties that can become opportunities. Yes, we are called to take our children to Mass. Yes, they will (hopefully only occasionally) embarrass or humiliate us. Knowing this, we should look at each Sunday Mass as an opportunity to die to self, and to live to God. We'd prefer to sit still, but we can't. We'd prefer to hold a missal, but instead we hold a toddler. We'd prefer to join in the singing, but we can't balance the book and babe. We'd prefer reflective silence, but instead we hear sibling fights. We'd prefer to appear dressed for the occasion, but instead our main Sunday outfit trademarks are mucus streaks and mussed up hair. We'd prefer to go unnoticed, but instead a hundred eyes are turned in our direction. In short, for parents, even Sunday Mass is an opportunity NOT to do what we want, but to do what God wants us to do in the situation we've been given...to pray amid screams and smells and glares from fellow parishioners. In short, to offer it up as a prayer. "Lord, this isn't how I would have chosen to celebrate Sunday Mass, but I embrace it cheerfully because it is what you have chosen for me. Thank you." And really, I think God smiles on any attempts to pray given the level of difficulty in the situations described above.

Lastly, about being embarrassed. It stinks, doesn't it? Before having young children in the pew with us, we were so... normal. Sure, many people - priests included - will commend us for bringing our children to Mass. They'll compliment our perseverance and our children's appearances or supposedly good behavior. But they'll also notice when you have to take your daughter to the bathroom during the Gloria for the ninth week in a row or when you have to retrieve a toy thrown three pews forward.

And then, also in the mystical body of Christ present at our local Masses will be some who don't approve of our decision to bring our loud, active children to church. They'll be disappointed in the distraction or unhappy in our apparent lack of discipline. They will make us feel judged and unwelcome. And it's a natural tendency to turn that judgment around - to dislike not only their glares, but to dislike them as well, perhaps to view them as enemies. As if taking a family to Sunday Mass isn't already difficult enough...now we have to endure the silent criticisms of people around us.

So here's another opportunity to say humbly: "These people don't annoy me. These people sanctify me. I offer my difficulty for them and love them even if my children annoy them." If we can endure humiliation, embarrassment and judgment with the same meekness in attitude as that of our Lord and Savior when he endured humiliation, embarrassment and judgment during his passion and death on the cross, then we will grow spiritually, benefiting not only ourselves, but also the entire Church, including those people who find our children to be distracting.

Lest anyone clicked on this post hoping for some tips on how to get your kids to behave at Mass, here are a few ideas in that vein. Some of them sometimes work for some of my kids at some Masses. Ahem.

1. Talk to your kids' guardian angels. The main task of guardian angels is to provide spiritual guidance, so ask your kids' guardian angels to assist you in helping your kids to worship. Teamwork.
2. If you have a VERY active child (in my experience, the most difficult is new walker to 20 months), consider attending a Mass that is begins near the start of his naptime, and get him to nap during Mass.
3. Alternately, consider attending an early Mass, before your kids start to get too cranky. Another benefit of this is that no matter how badly it goes, it's all over by 9:00 a.m. Beware that these Masses generally don't have many children in attendance. That can work for you - everyone loves your kids because they are the only ones there! Or it can work against you - everyone dislikes your kids because they are the only ones there, where they apparently should not be.
4. Another idea is to attend a kid-focused Mass, perhaps one where they take the kids out for the Liturgy of the Word or at least where there are many children present in Church, making it difficult for everyone to know that it's actually your kids doing the screaming.
5. In times of desperation, consider your spouse and you attending different Masses. When my husband injured his back and I was eight months pregnant, neither one of us could hold our 25 pound toddler for the entirety of Mass and he insisted upon it. The best alternative in the situation was attending separate services. Another solution to a problem like this is hiring a baby-sitter for an hour.
6. If you find yourself plagued by sibling squabbles, consider having you and your spouse sit in separate parts of the church at the same Mass, dividing up the kids who fight the most.
7. Talk to your kids about Mass outside of Mass. Try to explain to them the significance, what's going on, etc. Sometimes it's ok to talk (whisper) to your kids during Mass, to direct their attention to important things, e.g. the elevation of the host.
8. In addition to Sunday Mass with your children, arrange to attend daily Mass without your children. This can help renew you spiritually when Sunday Mass is feeling like more of a trial than a prayer.
9. Make sure your children are well fed before you get to church. Try to get them to go to the bathroom before you get to church. Perhaps bring a small toy or activity book.
10. Offer rewards for good behavior. Be concrete. It can't just be "good" behavior, but "If you stay in the pew the whole Mass" or "If you don't have any fights with your sister" or "If you use only use your whisper-voice" or something in that vein. For kids old enough to understand consequences, it may also work to remove them from the church if they are misbehaving, and give them a time out in the church basement.
11. Make Sundays really special for your kids. Let them know it's the most important day of the week by doing stuff that's out of the ordinary routine - different food, different activities, etc. Try to avoid their primary association with Sunday Mass being really upset and angry parents.
12. Offer it up! See above. Sometimes parental attitude adjustment really does make a difference. It's easy to be anxious and on edge when you feel like you're being judged or humiliated. Once you embrace that as permitted by God's will for your sanctification, it's easier to relax and kids seem to sense your peace and calm down.

Posted by Theologian Mom at 7:43 PM